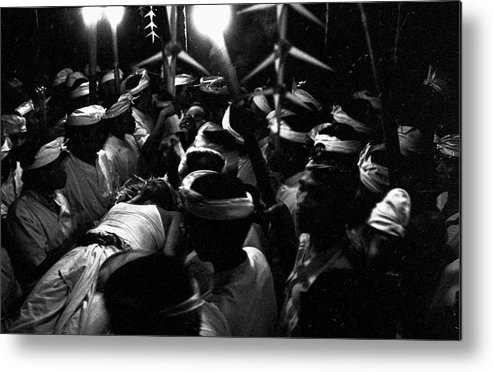 Into The Light - Animist Ceremony, Bali, Indonesia metal print by Earth And Spirit.   Bring your artwork to life with the stylish lines and added depth of a metal print. Your image gets printed directly onto a sheet of 1/16" thick aluminum. The aluminum sheet is offset from the wall by a 3/4" thick wooden frame which is attached to the back. The high gloss of the aluminum sheet complements the rich colors of any image to produce stunning results.

The beautiful island of Bali in Indonesia is predominantly Hindu on its surface. But underneath that there lies a powerful and ancient current of... more

It's probably a frenzied adrenaline rush. And if a person survives, he will be able to feel immortal, and he will never be afraid of anything.

This man survived. Wish I could've talked to him afterwards.

The beautiful island of Bali in Indonesia is predominantly Hindu on its surface. But underneath that there lies a powerful and ancient current of Animism and Animist beliefs. There are Ancient Spirits in everything. Both good and evil. And they must be kept happy in order for the Living to prosper. Here in this secret, extremely dangerous, sacred ceremony, a man has been buried alive in a coffin for several days. He has volunteered for this, and considers it an honor to chosen. And now he has been just dug up. His body is anointed, and attempts are made to revive him by the High Priest. If he survives this he will have messages received from the village ancestors while he was underground. In a world somewhere between the living and the dead. ceremony, jungle, bali, indonesia, animist, hindu, travel, photography, black and white, ancient, spiritual, group, men, night, animism, belief, ritual, worship, high priest, villagers, village, tribal, culture, mystical, sacred,