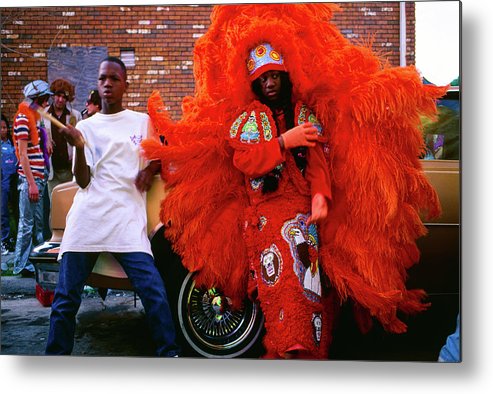 Treme - Mardi Gras Black Indian Parade, New Orleans metal print by Earth And Spirit.   Bring your artwork to life with the stylish lines and added depth of a metal print. Your image gets printed directly onto a sheet of 1/16" thick aluminum. The aluminum sheet is offset from the wall by a 3/4" thick wooden frame which is attached to the back. The high gloss of the aluminum sheet complements the rich colors of any image to produce stunning results.

The Black Indian Parade in New Orleans. (Also called Mardi Gras Indian Parade.) It is a colorful tradition that dates back to the days of Slavery.... more

Awesome composition, lighting, shading, color and artwork! F/L … voted for this piece in the THE COLOR RED contest!

The Black Indian Parade in New Orleans. (Also called Mardi Gras Indian Parade.) It is a colorful tradition that dates back to the days of Slavery. And it is held only in the urban neighborhoods of New Orleans, like Treme, seen here. There is a structure & hierarchy to the Tribes. They include the Chief, Flag Boy, Spy Boys, Call Boys, Second-liners, and so on. Here we see one of the Spy Boys resting up for a moment. And next to him his friend is a Second- Liner. They make the music for the Tribe.Because of these structures in the Tribe this Tradition went virtually unknown outside the poor, black communities in New Orleans until the late 1970's. mardi gras, fat tuesday, black indian, parade, spy boy, second liners, new orleans, treme, heritage, the south, louisiana, costumes, costume, tradition, traditional, dress, tribe, uptown, downtown, suits, masks, plumes, feathers, man, art, culture, folk art, usa, america,